Live in Chicago or visiting Chicago with the family and kids? Despite being an urban setting, Chicago has a plethora of really great parks for kids. Check out these five that also offer an opportunity to play some tennis and swing for the fences.

This post was sponsored by WaterWipes as part of an Influencer Activation for Influence Central. I received complimentary products to facilitate my review. 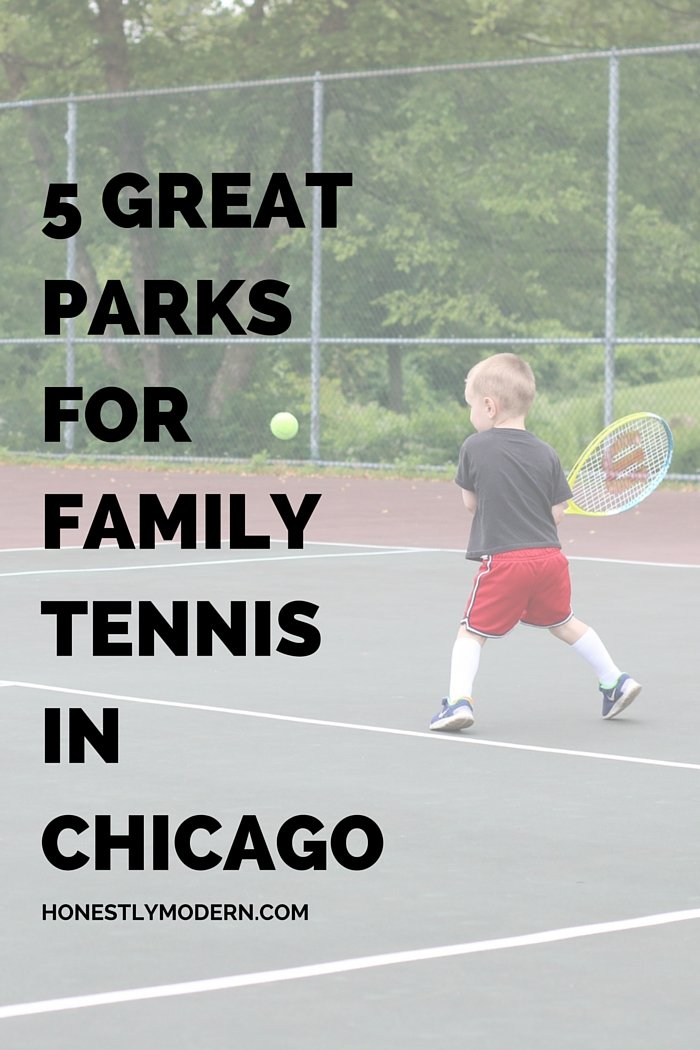 I’ve had a tennis racquet for as long as I can remember. Before taking hundreds of lessons in elementary, middle and high school, I started playing with my family.

I recall (or at least have seen pictures and been told) stories about my sisters and I on the court with my dad, a former tennis ringer who played competitively in high school and college. He’d tell us to yell out the number on the ball as it floated to us, in an effort to teach us to keep our eyes on the ball.

As I got older, I remember walking to the local park to hit with my dad. We’d practice ground strokes and then play a couple games, before I inevitably lost my cool over one missed shot or two and got frustrated. To say I was a ‘hot head’ may have been an understatement.

I like to think I’ve (mostly) outgrown that trait.

Our boys are just getting old enough now to pass on the family tennis tradition and take them to the park for a few cracks at the ball. M’s family plays tennis too, so these boys are “doomed” to at least learn competency on the court, regardless of whether or not they decide to take it up competitively.

T loves to play while J still seems to be feeling things out. 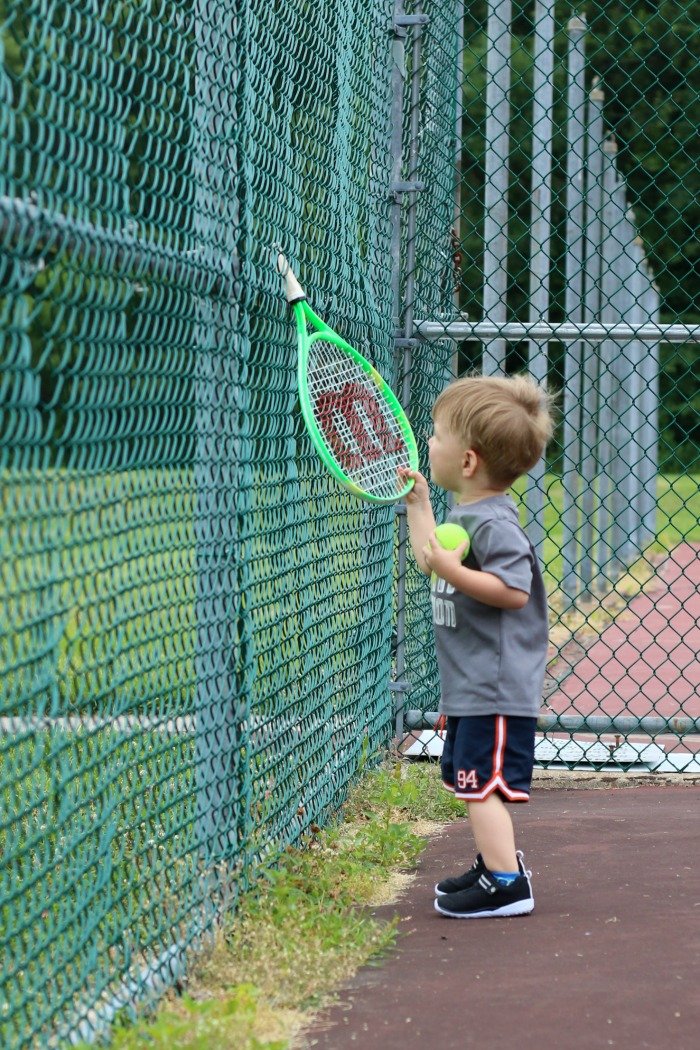 We’ve made it out to the tennis courts a time or two since our move to Philly. Impeccable, albeit warm, weather made good tennis conditions easy to come by.

Before our move, we also had some opportunities to take T out on the court in Chicago. J was never really old enough during our city living stint to play.

Chicago has lots of courts. But, as you know, it also has lots of people. In my opinion, there are far more players than courts, so court time isn’t always easy to find. The public courts also have this intricate reservation system, the rules for which are posted on each set of courts, that took receiving a lecture from a local to understand the first time I played.

Needless-to-say, it was great to take the boys out for some tennis (or play with a friend, like I did regularly before the boys were born) in one of Chicago’s amazing parks.

When we bring our boys to the park or the courts, we still carry along a few toddler supplies like diapers, wipes, small snacks, and J’s pacifier to heed off any threat of dirty, tired, hungry, crabby boys the whole way home. That’s a seriously not fun situation. Wipes, as all moms know, also come in handy for cleaning sticky hands and messy faces too.

At Target recently, I picked up WaterWipes, an alternative to standard wipes we had used previously. Of course, like any good Target trip, I entered with an intention to buy one thing and left with three bags full of goodness. Doesn’t Target have an amazing way of doing that?! 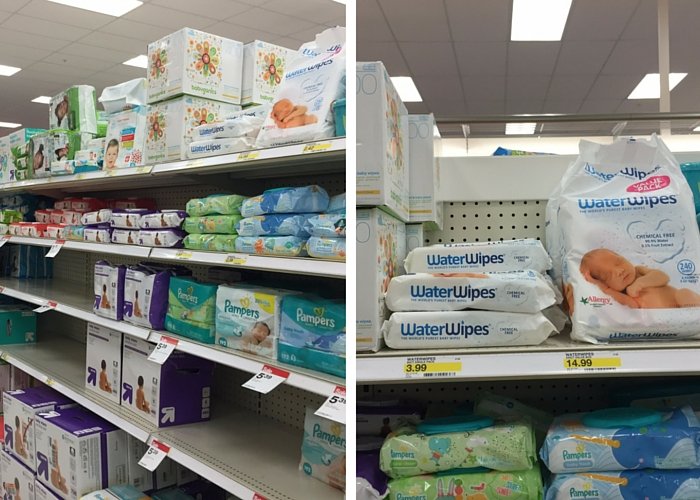 If you’re also a sucker for Boutique Target like me, be sure to enter the contest at the bottom of the post to win one of five (5) $100 Target gift cards. The contest closes on August 18, so you can keep returning to enter often. For me at least, a Target gift card is nearly as good as cash. You’ve got nothing to lose by entering.

If you’ve been hanging around here for any length of time, you know my family and I are always taking incremental steps toward a more healthy and sustainable lifestyle. Little changes can go a long way when added up over time.

Back at the park, we would wind up our play and let T take a few last whacks at the ball. We pack up the stroller for the next group to claim their hour on the busy court. 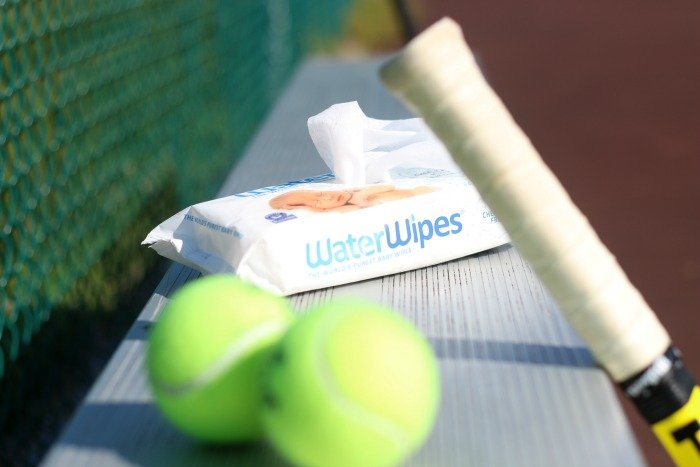 After some tennis, as the boys climb in their stroller or the car, we have an inevitable series of events that take place. J drops his pacifier on the dirty ground. Gross. Wipe that off. T wants a snack. Wipe down those hands. J eats his snack too and his face ends up covered in snack remnants (no matter what we offered him). Wipe that face clean. With all the cleaning, it doesn’t feel so bad to have a better idea of what exactly I’m wiping all over my boys’ hands and faces and pacifiers. 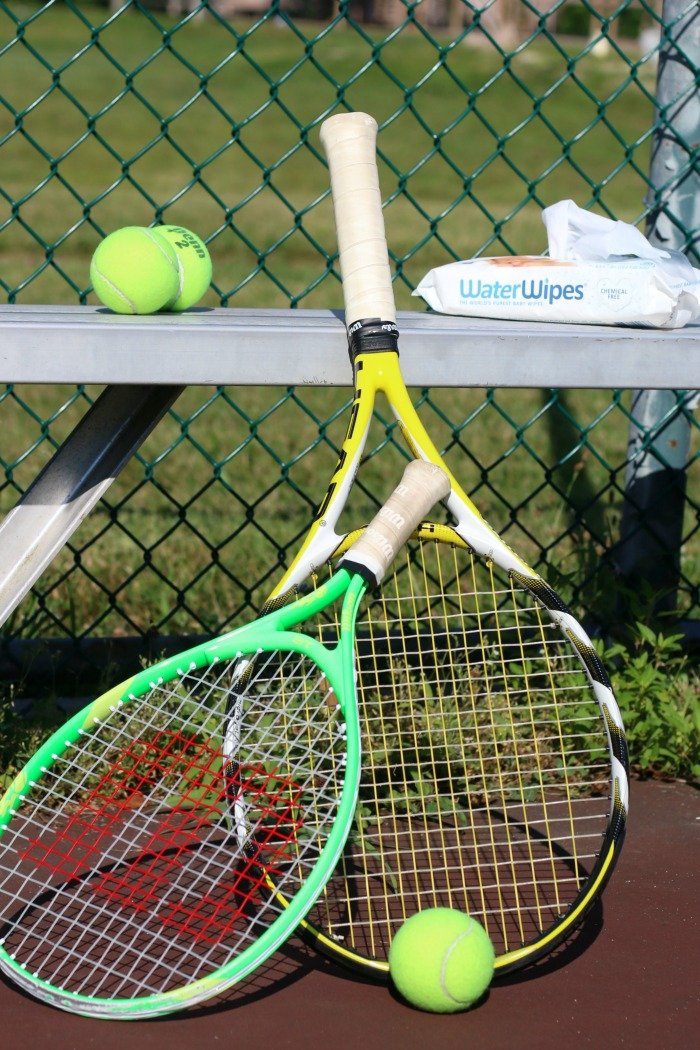 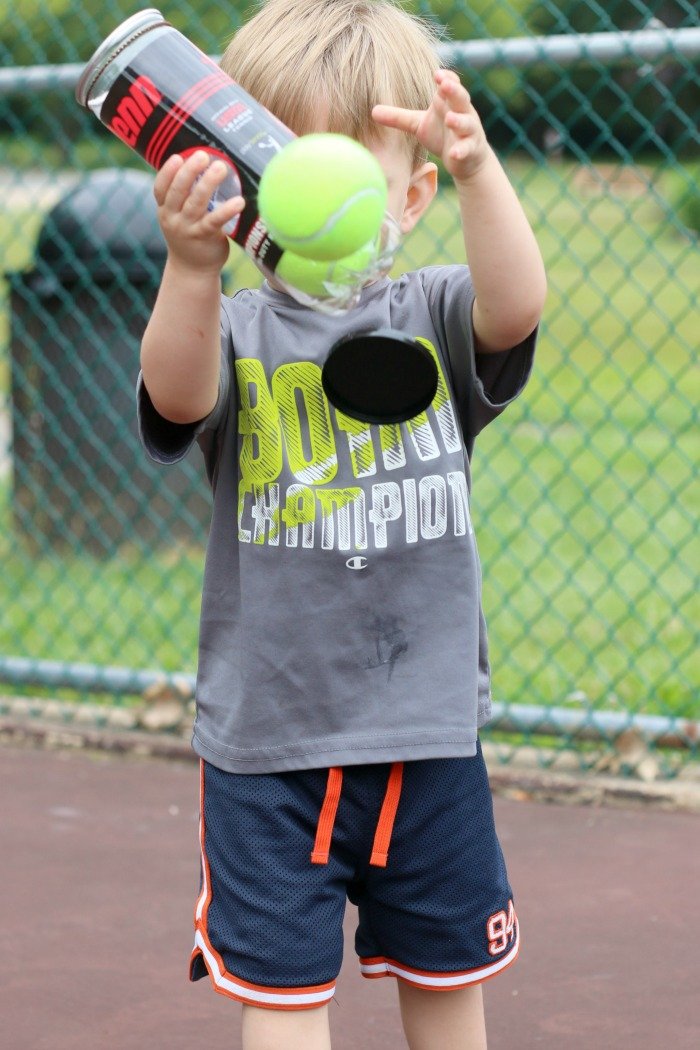 Even though they’re often busy, Chicago’s tennis courts are another aspect of the city park gems that define its public spaces. The city has great parks for kids, beautiful lake fronts (including my favorite beach for kids that’s right downtown), and some great tennis courts hiding among all the usual suspects.

Here are 5 of my favorite spots to play a bit of tennis with your family in Chicago.

Lake Shore Park (808 N. Lake Shore Dr.) ~ This location only has two courts, but they’re right next to a track and just a block from two separate playgrounds. (I wrote more about those Chicago play areas previously). The courts are generally sunny, which I like in Chicago’s not-always-so-hot weather.

Oz Park (2021 N. Burling St.) ~ These are a bit farther north and in a popular Chicago neighborhood. You won’t find many tourists here, but it’s a great spot to go if you’re looking for some local food hot spots after your match. Definitely no tourist trap food joints around here.

Lincoln Park Waveland (3700 N. Recreation Drive) ~ These courts are great because they are right along the lake and there are TONS of them. If you’re heading there on a weekend, be sure to visit early before the waits get long. But with so many courts, it’s one of your best options for sure. And no one’s complaining that it’s close to the lake and Lincoln Park.

Grant Park (Balboa & Columbus Drive) ~ There are a handful of courts on the south side of Grant Park not far from Buckingham fountain. If you’re visiting from out of town and want to squeeze in a little exercise, this will be your best bet.

Maggie Daley Park (337 E. Randolph St.) ~ These brand new courts just opened this year, so you might be able to catch a court while they’re still a little unknown. If the courts are busy, you can always pop over to the amazing playground, particularly suited for children who are a bit older.

Good luck if you decide to check any of them out! If you live in Chicago or have visited, do you have any other favorite tennis spots in the city?

Don’t forget to enter the giveaway below! 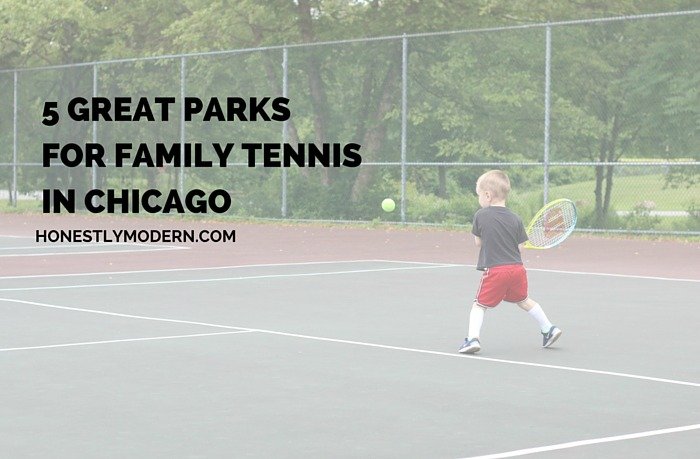 I-C will randomly select winners from all program entries and will facilitate fulfillment of the winning prizes (5 winners).

← Previous
Why the "Sale" Isn't Really a Sale

I’m Jen, the author of Honestly Modern, an online space all about eco-friendly living for modern families. Check out more and explore climate action, zero waste living principles, regenerative gardening, and intersectional environmentalism, all through the lens of modern family life.